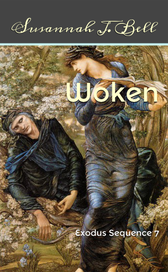 A magician is tempted into his future.

On the shores of a magical lake, Nimue rises from the water to greet a stranger just woken in the forest.  He appears young but isn’t and he only begins to remember who he is when he sees her.  A romance unfolds on the shore – but Nimue wants more.  She wants to be as he is:  immortal and free.  He shows her magic and explains to her the complexity of true immortality.  Wanting nothing more than to remember her past, they travel wildly into the cold and dark.  When she does begin to remember who she is, it’s Meridian’s identity that is doomed.

"What do you want more than anything in the world, Nimue?”
She looked up at the sky.  Moonlight touched her skin and lit her pale sea-green eyes.  “I want the moon.”
“Then I’ll give you the moon,”  said Meridian.
“You can’t give me the moon.  No one can give me the moon.  The  moon isn’t to give.”

​I wrote this in one of the hottest summers I can remember in London, the kind of summers which seem to be happening more and more often:  horrendous humidity, heavy pollution, streets stinking of dog shit and garbage.  If you have no money, there’s no relief from it either.  The parks and squares are full of rather repulsive flesh and anyway, the grass is invariably burnt and the trees drooping and dying.
I also hurt my back at work in the middle of writing, so it was a relief to escape the trials of life to this beautiful, peaceful world of lakes and mists and forests.  It’s the only fantasy-style story in the sequence.
Nimue has appeared in literature in all sorts of guises.  Wiki lists eight names for her and she’s sometimes one character, sometimes many.  She seems to have been mostly the lady of the lake, but sometimes not.  She’s been good, she’s been bad but she’s always been beautiful and there’s always a connection to Merlin.  As for Merlin, there are no stories that satisfy my interest in him.  Just as I have my own ideas about Atlantis, I have my own ideas about Merlin and though these two ideas have been linked in other stories, mine don’t resemble them at all.
This is the most romantic of the Exodus stories.  The connections are very strong but not yet obvious and it would be unfair to even hint at what they are.  There is mention of Miranda, whose name has appeared in several previous stories.  The two main characters spend a great deal of time talking about immortality and an eternal life.  The difference between their bodies is the core of the Exodus Sequence and Nimue’s desire to remember her previous lives forms the heart of WOKEN.
The story takes a long time to start and the writing is, at first, a bit dense and clumsy.  But stick with it because it because the magic and the intensity of their relationship – and the cruelty of it – swept me away from the horrors of a modern London summer and back pain.  I couldn’t have asked for more.
Powered by