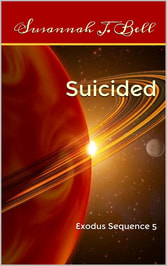 A dirt fighter experiences a revelation that goes beyond immortality.

In a gladiatorial-style dirt arena on Ires – common name Titan – Rape is pitched against Iron.  It’s a fight to the death.  But because these are immortals, death is only temporary.  In a revenge attack, Rape – whose name has been cut from Rapier – undergoes a reversal of Self, a transformation that is unprecedented.  Not knowing what else to do with him, he is locked in an electronic cage, in isolation, for all time.  Then he is offered a deal.  And this time, death won’t temporary.

He danced out of Iron’s reach.  He was aching with exhaustion.  Pain hammered at him but the look in his eye would have made a more intelligent man blanch.  Iron seemed not to have noticed but the crowd recognised the stance, if Iron didn’t.  The camera bugs moved in.  Handheld screens maxed on zoom.  Iron was raging.  He had been pushed beyond normal endurance.

This is my favourite Exodus Sequence story.  The character exploded into life unexpectedly, his minor role becoming a major one as new elements of the plot were suddenly revealed to me.  It’s not often that, as an author, I get wild flashes of inspiration.  Rapier was one of them.  With his name cut down to Rape, his first scene fighting to the death in a gladiatorial-type dirt pit, he’s not the sort of character I would take to if I was reading it for the first time.  But halfway through something happens to him that has immense consequences:  he becomes truly titanic, a wonderful irony since his faction lives on the moon Ires – or Titan.
What I love about this story is that I managed to balance it perfectly:  the violence in the first half and the long, clever conversations in the second half after the spiritual awakening.  A great deal more is learned about these “aliens” whom we have only viewed so far through human eyes.  The central plot is also revealed but not the identity of the main characters.  I will say that there are four primary characters and by the end of the first collection, all four would have been met, some more than once, mostly in different incarnations.  In the second collection, they will begin to interact more as the past is revealed and the future is forged.
Of the nine published short stories, CRASHED is at the exact centre and connects to all the others, though the connections may, at first, be invisible.
And, yes, I did have immense difficulty in working with a character with so emotive a name.
Powered by