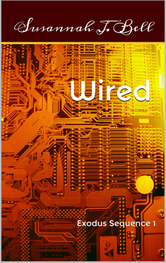 A hunter disturbs war-vets in a nightmare wire prison.

An unknown prisoner arrives in a prison constructed entirely of wire cages, so vast the cages can only be reached by shuttle.  The prisoner is under constant watch from the tower – they don’t know his name – they don’t know what he did.  His arrival electrifies the other prisoners.  Some are frightened of him.  Some want to kill him.  Some begin to remember a forgotten war.  When an agent is sent in to interrogate him, he turns her telepathic powers against her.  And then the lights go out.

The trial had lasted 198 000 seconds.  Whacked on the drugs they had given him, he could only remember it in flashes.  The faces at the trial, all turning to watch him, expressionless, convicting him for something they didn’t understand, the judge pretending that it was a normal case, nothing unusual, nothing galactic.  Another flash and he was given a choice.  Life sentence or execution.  Life sentence meant escape so he chose it.

​​Writing this short story was an exercise in restraint – I held back on the violence so hard that you can feel it under the skin of the main character. He barely moves and says very little but you can hardly take your eyes off him. As the first story in the Exodus Sequence, I set about creating a mystery that would unfold obliquely through the other stories. Huge questions are asked: who is the prisoner, is he an alien, was there a war, why is everyone locked up in wire cages. But the biggest mystery of all may be the scenes that directly involve the main character and the telepathic girl. The story becomes almost incomprehensible at this point and I’ve had readers mention that they didn’t actually understand what was going on. This is entirely the point – but never fear, the mind games are delved into further in several of the other Exodus stories. The story’s strongest connection is with “Caged” which is the last novelette in the sequence. I think this is a four star story, losing one star for its possible lack of comprehension.