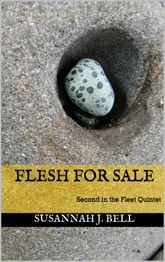 The Fleet are moving in to the Sigma Sector and people are beginning to disappear.

When Sistia Scarpora is seven, her mother is driven to her death by a mindwalker.  When she is fifteen, her father sells himself to the Fleet on a five year contract.  Fifteen years later, he still hasn’t come back.  Sistia starts to dig to find the truth about the Fleet.  Warned off by Sigma agents, stonewalled by Federal agents, she finally approaches a Recovery agent – Igen Dyce.  With a success rate of zero, Sistia is reluctant to commit to Recovery.  The price she will have to pay is too high.  To find her father, she has to infiltrate a secret Fleet world.  She will have to sell herself to the Fleet.

In Greater Control, Fleet personnel 270 makes a selection that has a chance of increasing her credit rating to 1 in a single lifetime.  To attain absolute zero means freedom.  The new body she assumes is beautiful.  Her new name is Sistia Scarpora.  Life in Wet City should be wonderful – but there is a flaw and it could cost her everything.

Lost to the Fleet, Sistia has to perform an act of desperate heroism to save the Sigma Sector.  There is only one man who can help her and he’s a mindwalker:  Vincent Gomenzi, a man who should be dead.

When I began FLESH FOR SALE, it was as the next Fleet novella after COMMENCES, at the time the first Fleet novella.  Between the two I had written a short story called Access Denied and it was only while writing FLESH FOR SALE that I thought to associated mindwalkers with the Fleet.  Access Denied (and its sequel Baby Doll) were brought into the Fleet universe, later turned into the novel TRANSFERENCE, now the first in the Fleet Quintet.

The heroine – and she really is a heroine, not just a protagonist – came to me fully formed.  I remember looking around the room I was working in at the time to find inspiration for her surname (I already knew her name was Sistia) and spotted a shoebox on a shelf.  They were for Italian mountain climbing boots (no, I’ve never climbed an Italian mountain)(I’ve never climbed a mountain, for that matter) and the name leapt out at me.  And there she was:  the fabulous Sistia Scarpora who doesn’t, for one single moment, regard herself as fabulous in any way.  Her phenomenal beauty is central to the plot but not in the way beauty is usually portrayed.

I stepped outside of several boxes in creating this novel:  Sistia’s exotic beauty;  her relationship with her father and how this is resolved;  the irony of her relationship with mindwalkers;  and the structure of the novel itself.  It’s an unusual structure in that there are chapters about Sistia told in the third person while most are in the first.  Only at the halfway point does the reason for this becomes wildly apparent.  Instead of a narrative device, it’s in fact an integral part of the plot.  Initially botched in my first attempt at the novel back in its novella days, I worked on it until I got it right.  When I was done, I realised that I had, somehow, graduated as an adult.  FLESH FOR SALE was, at the time, my most mature work and Sistia Scarpora remains, for me, an unsurpassable creation of fully grown woman-ness.

There’s more world building in this Fleet novel than in the others.  While TRANSFERENCE is intentionally claustrophobic, Sistia at least gets to travel a bit.  Creating Lomensis, the old world she lives on, and Narthenaecia, the city where she grows up, was fantastically exciting.  After TRANSFERENCE, readers would be familiar with Lomensis as planet Nigel is a Lomensii colony world and Aster plans to move there (providing she can get a passport.)  I also loved creating Wet City – it’s a highly stylised and super-modern version of the City of London, all the glittery, shiny best bits without the history.

Readers will also recognise several characters that were briefly introduced in TRANSFERENCE:  Vincent Gomenzi, Dragør Johnson;  even President Waughmaker gets a mention.  The tumultuous events of TRANSFERENCE are barely a blip in history from the point of view of FLESH FOR SALE.  Centuries have passed and the Fleet are no longer a rumour.  Mindwalkers are no longer a myth.  And Vincent Gomenzi shouldn’t be alive.

FLESH FOR SALE remains one of my strongest works, not just because Sistia has to face the Fleet but because she has to face her own personal demons.  I also got to rewrite my own history, surely a writer’s greatest joy.
EXTRACT

But still I couldn't move, couldn't speak.  My eyes were squeezed shut.  My lips were torn back from my teeth.  And then a nail gun fired into my skull.  I opened my eyes and saw Aelf, but he was sitting behind me.  I turned and saw the doctor standing in front of me, his mouth moving as if he was talking to me but I couldn't hear what he was saying.  I looked down and saw my body sitting in a chair in a room in an abandoned wing of a research hospital.  I saw the drugs being pumped into my veins.  I saw the pain.  It was Aelf.  Beams of what I thought must be energy emanated from him.  He was using them to hold me still. He was using them to keep me in an incident that had never happened.  I'd never been a pilot.  I'd never flown a space vehicle.  But that wasn't the point.  The pain and the drugs and the words that the doctor spoke were holding me in space. The imagery was a by-product.  The sound of the nail gun exploded once again in my brain and I heard Aelf say, quite clearly, "You cannot be broken."
Except that I was broken.  I lay under the sky in the last place in the universe where I had been whole and heard the crickets chirruping in the grass.  There was no chance I could move so I didn't try.  My body felt awkward and heavy, as if I had fallen.  I was sure to be bruised later.  Except that there would not be a later.  This wasn't real.  Whatever real was.  I heard the sound of the man bending down beside me and turned my face to him.
Powered by