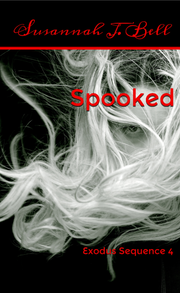 A secret agent approaches a maths genius and offers her a job breaking codes.

Angelica Zippoli – or Zipp – takes her meds, sticks to her routine, goes to her dull job.  She’s already been sectioned once and doesn’t want to lose it again.  Even the white shadows are leaving her alone.  But then she’s approached by a very polite secret agent with a dream job offer:  deciphering streams of incomprehensible numbers transmitted by a satellite moments before it crashed.  The numbers trigger strange memories – memories she shouldn’t have.  And then she sees a white shadow.

There was no buzz of electricity, no electronic hum, no sound.  It might not have been there at all but already she was accessing data, touching what they called a mind-space screen, her fingers in the air in front of her face, accessing icons, moving deeper and deeper into a world that was light years beyond the holographic.

​Zipp’s first entry in the Exodus Sequence was to have been in a short story called “Sacrificed” – except that it got out of hand and ended up as a short novel.  Thinking to turn it into a full-length novel, I added a Part Two to wrap things up, an addition which later turned into separate entry in the sequence.  The novel was a disaster and when I finally dropped it, my confidence was shattered.  It was a relief to return to my original plan to publish the vast Exodus story in snippets contained within novelettes.  And the story is vast.  Characters appearing in different incarnations over millions of years would, for me, make a dull sequence of novels.  I wanted to approach the telling of the story in tightly-focussed incidents, such as this one, where Angelica Zippoli, or Zipp, meets the mysterious Mr Nylon for the first time.  Originally, it was only a tiny part of the story, told in brief flashback, but its significance was impossible to ignore.
SPOOKED is set slightly in the future in a London that is instantly recognisable though slightly more dystopian.  The zombification of the masses assured through the widespread use of a “G”, a high-tech communication device utilising a mind-space screen – “like having the www inside your head.”
The story has many strong connections with others in the sequence, all of which I’m reluctant to mention as they would be huge plot spoilers.  Some of the connections will only be revealed in the second collection so pay attention!
Powered by