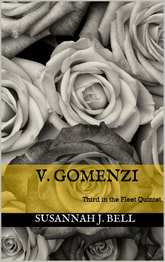 The Fleet must be stopped before everyone in the Sigma Sector disappears forever.

Vincent Gomenzi leaves Earth when he is sixteen, knowing that he can never mindwalk again.  The terrifying maw of the vortex waits for him if he tries to transfer out.  As the first mindwalker, Fleet personnel 1, he was once the most destructive force in the Sigma Sector ...

Igen Dyce loses his fiancé to the Fleet.  A baseball star on Lomensis, he forms the Lomensii branch of Recovery, an underground organisation formed to rescue those lost to the Fleet.  When he meets the spectacular Sistia Scarpora, he hasn’t yet saved a single soul ...

The Angel of Deadly Enlightenment tries to escape from the Garden of Truth but is doomed to return in every new cast.  When it finally works out what Truth is, the Fleet will be scarred for all eternity, the memory of their encounters setting in motion the downfall of the Sigma Sector ...

From the freelance operative to the machine city, Vincent’s jump in time leads him to Recovery.  From the Garden of Truth to the Fleet installation, he learns the truth about what he has done.  And from the vortex to the stone angel, he has to undo the past to save the future ...


​
The third novel in the Fleet Quintet, the three strands of V. GOMENZI cover the same time period as TRANSFERENCE and FLESH FOR SALE – reaching further into the future and far, far back into the past, almost to the beginning.
WRITING V. GOMENZI

This was a massive novel to write.  It was intended to be the fourth novel in the Fleet Quintet and encompassed all three earlier novels, beginning before the first one (Commences – yet to be published) and ending after the third one (Flesh for Sale).  I had to work out how to get my main character to leap 400 years in the future without using any of the standard sci-fi style tech:  time travel, time machines, black holes, worm holes, any other kind of hole in space...

I wrote the first four novels of the Fleet Quintet one after the other, which meant that I carried the story around in my head for YEARS.  I felt as if I was inside alter-space itself and that feeling of being disconnected from reality shows strongly in the novel:  Vincent is not connected to the universe the way anyone else is.  His time track is different, even as a Fleet being, and his beginning remains unknown.

Readers who get this far in the Fleet Quintet will feel some closure.  Vincent’s story feels finished and so is Sistia’s.  The Fleet appeared to have run away and the Fleet game is over.  In fact, the Fleet game was already over in Flesh for Sale:  how many more times can I end this story?!  But the story had not ended with Flesh for Sale.  At the end of that novel, Vincent goes on without Sistia and it’s in this novel that we find out where he goes – and who he takes with him and why.

I had to work very hard on the three strands of the novel.  At first I alternated easily between the three.  However, as the plot became more complex, some of the strands began to tangle, sometimes badly.  I threw out an entire section, only to resurrect it later – when I no longer had access to the original writing.  Writing the novel was a process fraught with dead ends and freaky time.  There were seconds that took pages to write and several centuries passed in a sentence.  Contracting and expanding time is a Fleet thing and being able to do this with writing was both exciting and nerve-wracking as I never could be sure I was expressing the inexpressible clearly enough.

V. Gomenzi has three starting points:  the moment when Vincent Gomenzi leaves Earth at 16;  the aftermath of the botched nuclear war on Nigel;  and an angel in a garden.  Integrating Vincent’s history was by far the hardest part.  I had to go over the same ground covered in Commences and then later had to do a monumental edit when I realised Commences was going to be the fourth in the quintet, not the first.  Much more fun was his relationship with Sistia Scarpora, already covered in Flesh for Sale, but here told from his point of view with new revelations.  The third strand deals with the history of Recovery, beginning with the wonderful Jenna Lloyd and Priest One from Transference, then Dragør Johnson and the mysterious space station, and later Igen, whom we get to know very well indeed.  V. Gomenzi basically covers the same ground as Transference, Flesh for Sale and Commences but goes much deeper.

Vincent Gomenzi is probably the deepest character I’ve ever created.  He was elusive at first but when he finally came alive on the page, I was delighted.  I still am.
EXTRACT

Vincent's attention had jerked outward.  He had heard something.  He had heard a moment of nothing.  A blankness, like a gap in the cosmos.  It was the very opposite of a mindwalker's shadow.  He stood up, killing his cigarette.  A high heel skidded on cobblestone.  Tang was reaching for a knife.  The shop door jingled.  Vincent was already out the back door into the alleyway when he heard the same high heel strike the steps that led down from the shop.  The light in the passageway buzzed and the back door shut without a sound.

It could have been anyone.  It could have been an irate mindwalker who had heard too much and didn't want to be nailed by the Fleet.  He thought he heard a scuffle, then voices.  One was female.  Something about it was false.  Vincent lit a cigarette and prepared to wait.  The alley was a deep slice between the walls of what had once been cinemas.  One end was dead, the other had a door that looked locked.  A heavy wrought-iron gate was pulled across it.  A fire escape led up over the roofs. The sky pressed down overhead, grey with patches of blue, pretending to be a nice day.  The drizzle had let up.  He heard a clink.  Tang must be making tea.  The women's accent was heavy and foreign but familiar.  Vincent couldn't think where he head it before.
​
His eyes were beginning to burn from the fallout.  It was time to go.  He eyed up the fire escape, then heard a gunshot. Someone was screaming in pain.  It sounded like a woman but it was Tang.  Fuck, he should never have left him.
Powered by