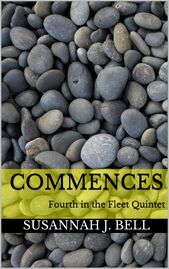 Although COMMENCES is the fourth novel in The Fleet Quintet, it can be read FIRST.

Billions of years ago, before the artificial universe, there was the Fleet.

Fleet personnel number 50, or Dett, sees a spacial dissociation in Fleet space and realises the control sector is broken.

She interacts violently with Fleet personnel 410, a Magician and time strategist who has been running a continuous cast for aeons.  Trapped in a time loop, they fall in love before being torn apart in the cast’s multi-dimensional war.

Dett begins a search that forces her from Fleet space into the artificial universe.  A bloody encounter with Fleet personnel 2 takes her onto different planes of reality, from her primary attractor to Garanthal, a planet plagued with alternate timelines.  2 never fights back but he has also had a revelation that goes beyond Fleet space.  Driven insane by a crucifixion tree, 2 wants 410 as a time engineer to unify the primary attractors, so beginning a new Fleet.

But the Fleet are in complete disarray.  All the rules have been broken.  The remaining Founders reconvene the Fleet only to witness an irretrievable split.

The fourth novel in The Fleet Quintet, COMMENCES begins where the old Fleet ends:  a surreal trip from a stone angel in a ruined garden to the angel Archturan whose ambitions for the Fleet are the most dangerous of all.
​
WRITING COMMENCES

Read about the struggle to create Commences here
EXTRACT

Like a magnetic storm, the spacial dissociation shifted across the sky.  A curtain fell suddenly on Dett and she felt her skin prickle.  She caught an impression of 2.  Then it was gone.  The curtain shifted away.  All around her, the sky looked as if it was falling.  Except it wasn’t the sky.  It was time.  These were the currents the tribal women had talked about.  Dett began to run.  Another curtain was shifting across the ground, rippling and shimmering.  Pulling her gun, she felt herself immersed.  2 was close.  She spun around but he wasn’t there.  But he had been.  Or he would be.  No one ever leaves Garanthal, he had said.  Which meant 410 was here.  And 2 was also looking for him.  She ran through the curtains, boots hitting the ground heavily so that desert stone cracked underfoot.  A curtain ahead of her began to shift away.  She threw herself into it and missed.  The wind was knocked out of her but she spun at once onto her back, holding the gun with both hands, ready to fire at anyone who came too close.  There was no one.  There was no sign of 2.