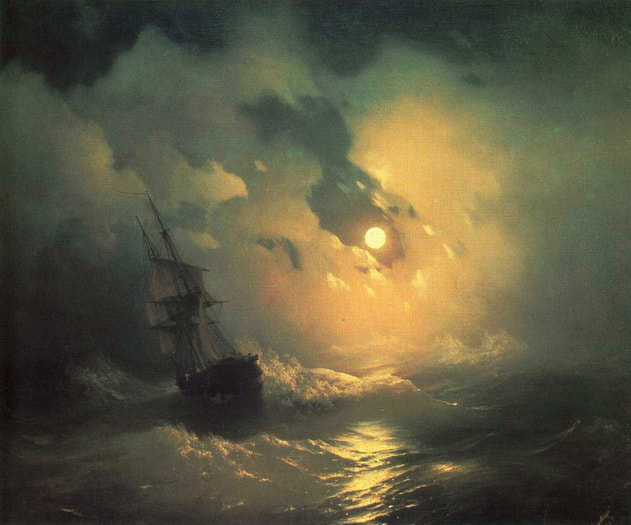 A disturbed sea captain brings disaster to his ship.

A sea captain – who, along with every other character, is never named – escapes the clutches of his fiancé, seeking the Sea of Deceit, armed only with an ancient map.  Instead, he finds a beautiful woman singing on a rock in the middle of the sea.  Frustrated by his fiancé’s cruel games, his desire for the beautiful woman is impossible to control.  When he kisses her, she dies, but this does not stop him.  Unable to resist her, he violates her.  Despite his horror at what he has done, he continues to violate her until finally his madness lifts long enough for him to bury the girl sensibly at sea.  Instead of being freed, however, he dreams of his fiancé and wakes to find blood on his hands and his entire crew horrifically murdered.
Nightmare and madness follow with a journey across an interminable wasteland towards a strange, surreal, inexplicable truth.

“Would that she not sing,”  he said.
I did not understand his words but suddenly I noticed how all my crew leaned towards the girl in the sea, their eyes fixed on her as if spellbound.  They too seemed to be listening and the boat itself seemed to drift toward her, her course unchecked, apparently drawn by her presence.  With some frustration, I lifted the glass again.  I heard no singing.  I heard nothing except the rain and the wind, my body braced as the deck rolled beneath my feet.  As I studied her again, I saw that her hair was unnaturally long and blew about her as if to clothe her.  It was the colour of old lace curtains I had once seen, a rich, creamy lace, faded into antiquity from white and holding within it the light of a covered candle.

​Very rarely a story comes from nowhere and strikes you and you are helpless to do anything except write it.  And then spend the next twenty years wondering where it came from, from what hidden part of oneself that one would rather not visit too often.  This was one of those stories.  Originally titled “The Sea of Deceit,” I wrote it in a fever of heat and hatred during one of the most upsetting periods of my life.  In my teens, I wrote a great deal of horror but this is the only work in this genre that I’ve thought of any value (and it was written LONG after my teens were dust).  Rereading it, thinking to include it in the Exodus Sequence, I was surprised to find it hadn’t lost any of its shock-value, nor it’s inexplicable strangeness.  With some tweaking and rewriting (and hammering to death of several fantasy-type clichés), it’s an excellent entry in the Sequence as it has all the qualities of the act of reflection practised by so many of the Exodus characters.  The surreal strangeness is similar to the dreamscape drug and one has to wonder whether the sea captain has been “scaped.”  I couldn’t tell you what is going on in this story because I barely know myself – sometimes one’s work is best analysed by others.  Its connection to the Exodus Sequence is in the emotional content rather than historical unfolding, which is why I never published it on its own.  I thought it would make a good jolt at the end of the collection.
​Its genre is probably horror-fantasy-erotica.